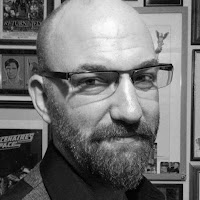 It's Asylum Wargaming's very first wargames show this forthcoming Saturday, and this week I'm interviewing some of the great and the good you can expect to see at the show. And so—hot on the heels of my interview with Gav Thorpe—I would like to present you with an interview with one of ChillCon's co-sponsor, Mark Rapson.


Hello Mark, and thank you for taking the time to chat with me today. Perhaps you'd like to begin by telling us a little about yourself?

I'm Mark Rapson, and my company is Word Forge Games. WFG is the company behind the vehicular combat game franchise: Devil’s Run, and the cheeky battling hamster game full of double entendre, CheekZ. We also cast miniatures for third parties—in both resin and metal—and render and 3D print!


I'm familiar with Devil's Run, so we'll come to that later. In the meantime, can you tell me a little about the hamster game?

CheekZ is a card game of bluffing and forward thinking. If I were to compare it to anything it would be Poker, but that is a very loose comparison. What I particularly like about it is its artwork, but also what Andy Ransome the designer has done with the cheekiness of the game. There is a lot of tongue in cheek fun to be had, with lots of double entendre. It works on two levels: for the kids it’s cute and gets them thinking mathematically; and for the grown-ups there is a whole barrel of laughs to be had.

It's interesting to see how different Cheekz and Devil's Run are. Do you have a third game up your sleeve? Or will you concentrate on your existing properties?

We actually have another three up our sleeves! Next up is a small project with local street artists. The game will be called Throwdown and is a card throwing game! I am excited about this as it's a cool rule set and it's awesome to work with the local community of artists. Our longer timescale project is called Star Knights, and like Devil's Run is a BIG project which we will build into a franchise. We haven't shared much yet, but I am personally very excited about this and the work that is being done right now on it. But our new big project is a licenced project for a 15mm tank battle game. It is a tabletop game, straight out the box. It will come to KS shortly. It is very cool with awesome models and a cool aesthetic; but the rules and how the game play is what really makes it for me.


Exciting times! I'm guessing you can't tell me the name of the tank license, right?

Yes I can. It's Absolute Decimation. Check www.wordforgegames.com for more info.


And how did the hook-up with the street artist come about? That's quite leftfield.

I had a flash of inspiration for a new game as I was tidying the house. It wasn't fleshed out, but as I cogitated it over the next day or two I settled on a brick wall idea for the background of the cards, and a graffiti look. I was going to ask my business partner to create the graffiti look, but the very next day an artist called Tim from BLINK Photography walked into my shop, Crescent Gaming Consortium, for the first time. We began chatting and I explained about Devil's Run and art, and he said, "Well, if you ever need any graffiti-style art, let me know..." I can't decide if that was fate, act of God, or blind luck ... but I'll take it!

So what are Throwdown!'s mechanics?

Throwdown! is a simple card game; think Twister crossed with a throwing game. Lots of skill, but lots of laughs too. It's also suitable for game for 1-4 players (and up to 8 if you combine the two variant games together).

Taking the card to the right as an example, if you can throw the card into the ThrowZone whilst jumping in the air, you earn 10 points.


And I assume different cards call for the player to perform different actions in order to earn points?

That's a neat idea. Certainly a greater level of physical activity than most card games call for.

Going back to something more conventional, what can you tell us about Star Knights?

Star Knights is the beginning of our next big, home grown franchise. In essence, it's a Space Opera.

The first product will be Star Knights: Solar Crusade, a game created in the tradition of the classic dungeon crawl games like Hero Quest and Descent. But we're doing something special with Star Knights by making it a 1 player game as well as a fully immersive multiplayer. The board game will come with modular board pieces that will be double-sided. Players will be able to place them in specified order or free form. The models will be one piece and of the highest quality. They'll also be rendered by our very own Ben, and also cast by our team. There will be four different races in the game. We've shown the 'lion' race already, but wait 'til you see the other stuff!

If you'd like to learn more then check the face book page at https://www.facebook.com/gamestarknights/.


So looking ahead to ChillCon, do you have anything special in store for the show?

Nice! Something to look forward to! I take it these are for Devil's Run? And am I right in thinking Route 666 is now out of print and we can look forward to the second edition?

Yes. We've now moved onto Devil's Run: Reaper's Revenge, and soon will have the retail game, Devil's Run: Hell's Highway. Devil's Run is going from strength to strength. A lot of people—including our awesome community—have worked really hard on it all!


Thanks for your time, Mark. All the best for Star Knights, and we look forward to seeing you at ChillCon...

...And in the meantime, let's all enjoy this space bull man from Star Knights: 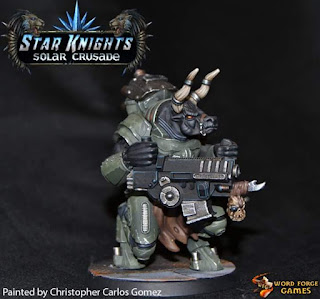 Posted by Asylum Wargaming at 17:28