Another Round? Another interview with Luke Fellows 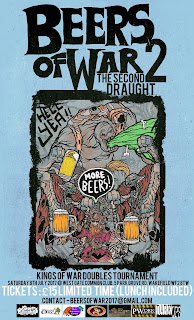 As part of Asylum Wargaming's continued support and enthusiasm for organised play, Steve JohnSnow and I are pleased to announce we are attending the this year's Beers of War event. A Kings of War tournament, Beers of War is a relaxed combination of wargaming and ... yes, you guessed it ... beer. Regular readers will know Steve and I attended the inaugural event last year as the Kings of Phwoar! team*, and we're very much looking forward to this year's event.

In anticipation of Beers of War 2, I recently interviewed the organiser—and star of YouTube smash Luke's APS—Luke Fellows about both last year's event, and his expectations for this sophomore tournament. 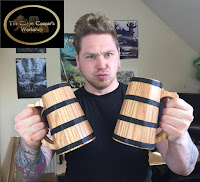 You've run your inaugural Beers of War event since we last spoke. How did that go?

It was great for a first event, and we [Luke and event co-organiser Lee Fellows] loved running it. To be honest, I don't remember much after dinner as I was drunk! Jokes aside it was great, and we learnt a lot. We were glad it came together as well as it did; for a first event it went really well.


Tell us a little more about Beers of War 2: the Second Draught.

Beers of War 2 is being held on 8th July in Wakefield. This time it's in a new venue, Westgate Common Club. It's a bigger place with cheaper beer for the people that don't win games...


﻿ So what are you changing this time?

Nothing much has changed apart from the venue. Also the terrain I've built will be more suitable for a movement-based game like Kings of War. The terrain I built for last year's event looked great, but was a little hard to navigate around, so I've fixed that for this year's tournament.

The channel is going from strength to strength, but looking after our baby daughter has reduced the time I have available to paint and film. I still aim to post one video a week, and I'm sure my regular viewers understand.
﻿

Aside from Beers of War and Luke’s APS, what else is new and shiny in the world of Luke Fellows?

Funny you should ask! I've bought myself a new motorbike, just so when I have some down time I can let my hair down by riding around the Yorkshire Dales and Moors. I've also launched a new YouTube channel called Luke's Ride Outs, so anyone into bikes can watch me on there as well.


And to sign off, what does Luke Fellows do when he’s not painting toys or ruling YouTube?

...But if I get a few hours here and there I go out on the bike for a ride. It's surprising what a ride can do to my productivity!

Thanks for your time, Luke. Steve and I are lookforward to seeing you at the event.


Tickets for Beers of War 2: the Second Draught are still available here. Steve and I will see you there, and a full report of our misadventures is coming your way next week.

*Last year Steve and I won two and drew one on our way to winning the Wooden Spoon; this year we're going one better by losing all three matches. You heard it here first!

Posted by Asylum Wargaming at 16:59