March of the Idiots: Asylum Wargaming Get S.L.A.yed. 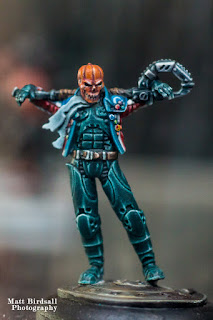 Today I bring you a further episode of March of the Idiots, in which I detail Asylum Wargaming's misadventures in various tournaments across the country. And, as promised, Steve, Spud and I have been misbehavin' again...

﻿﻿﻿﻿
Not content with getting out asses handed to us at the recent Beers of War tournament, we decided we'd quite like to get our collective butts kicked in another event. As luck would have it those nice people at Daruma Productions were happy to oblige...

With the release of their S.L.A. Industries: CS1 skirmish game on the horizon, Daruma hosted a CS1 tournament on Sunday 26th February in Doncaster. Designed to stress-test both the beta version of the SC1 and the tournament rules, it not only more than fulfilled its promise of a knock 'em down, shoot 'em up event, but also underlined just how good the CS1 rules really are. Better yet, not only were some juicy new releases on offer, but lunch was also provided. Result!
﻿﻿


Whilst Spud and I started the day off with victory over Steve and Daruma's Brad (who was on hand to teach us the rules!), things then went down hill rapidly. I lost in my second game, and poor Spud's new favourite faction, the Carrien, were decimated by Steve's Shivers. But that doesn't really tell the whole story...
﻿﻿


﻿﻿﻿﻿﻿﻿The most important thing is we had a cracking time. So good, in fact, that Steve and Spudly are now S.L.A. Industries converts. I already knew it was cool ('cos I'm old enough to remember it form the first time 'round), but now my colleagues have caught the bug. This illustrates the strengths of S.L.A. Industries: CS1: it's a really neat, elegant system supported by great miniatures. With its evocative setting, lovely art (thank you, Dave Allsop!) and a great line of merchandise, this is another addition to the U.K.'s pantheon of excellent indie games. And CS1 is only going to get better. With more releases in the pipeline (including the truly gruesome Cannibal faction!), S.L.A. Industries: CS1 is going from strength to strength ... and we at Asylum Wargaming can't wait to see what else they have up their sleeve.